Oneida County sits at the southwest foothills of the Adirondack Mountains in central New York State. With a total population of more than 230,000, the County is both urban and rural. Its three cities—Utica, Rome and Sherrill—and dozens of towns and villages constitute a unique community, with business and industry ranging from agriculture and low-tech family-owned enterprises to high-tech engineers and scientists at the Air Force Research Laboratory in Rome and the Masonic Medical Research Laboratory. Utica is the seat of Oneida County and home to the majority of its facilities and employees.

In 2007, officials began identifying a number of public safety communications needs that could not be addressed with the traditional wireline options available in and around Utica: 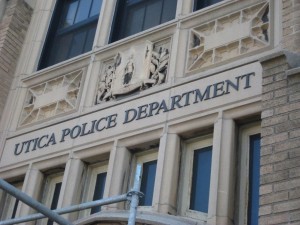 “Originally, our needs were small with the D.A.’s camera project, but we expected that our network would become more complex and multi-jurisdictional to support a range of voice, video and data applications,” said Dean Grant Interim Director, Oneida County Central Services. “We needed a partner that could help us think through the range of IT networking and security technologies, put together a design and phase-in plan, then make it operational for us within our budget. We knew Integrated Systems from their work with other counties in New York, and felt they were the perfect choice.”

Integrated Systems is a New York State contractor offering consulting, engineering, implementation and service capabilities across a broad portfolio of wireless and IP video technologies. The company, based in Rochester, has deployed wireless broadband network connections for customers throughout New York and surrounding states, and has experience meeting the voice and data needs of counties and local governments throughout the state.

In addition, Integrated Systems had successfully deployed citywide surveillance and video management systems for a number of municipal customers.

Following extensive discussions and surveys, Integrated Systems selected Telrad’s carrier-class LTE Point-to-Multipoint (PtMP) wireless platform to transport streams from over 20 Axis Communications IP video cameras deployed at key intersections around the city. The images are backhauled to the District Attorney’s offices at the County Building and, from there, transmit to the Police Department over a Point-to-Point (PtP) wireless connection.

The PtMP architecture provides a number of advantages, including security, support for a range of frequencies and high availability. Each PtMP sector supports a node in a specific section of downtown Utica with 16 to 25Mbps of bandwidth, enough capacity for connecting up to 25 cameras over a secured Wi-Fi or wireless mesh network.

To reliably backhaul the images from additional cameras a mile away at the Arterial Pedestrian Bridge, a key structure in the NYSDOT urban renewal project, technicians installed a SAF 23GHz 300Mbps backhaul link.

With main servers housed in the Oneida County Building in downtown Utica, Integrated Systems recommended a star, or ‘hub and spoke’, network topology as the most cost-effective wireless WAN/MAN design. Using the downtown County Building as the home site, the wireless engineering team verified line-of-sight distance to the facilities with higher bandwidth needs: 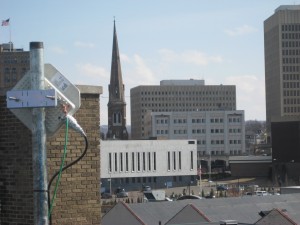 In addition, from the EMS site in Oriskany, Integrated Systems was able to design connections to two other nearby sites with high-bandwidth redundancy needs:

For higher bandwidth connections spanning up to a mile, engineers selected BridgeWave radios in the FCC-licensed 80GHz band. To reliably cover the distances longer than 1 mile, Integrated Systems installed SAF microwave links working in the FCC-licensed 6GHz and 18GHz bands.

With the successful deployment and operation of the video surveillance system, Oneida County had access to a tool for tracking gang movement in Utica, using that information to successfully secure state grants to fund additional resources. City law enforcement was then able to more effectively deploy these enhanced resources to combat drug-related violence and deter other crime. These actions contributed to a 22.5% reduction in the crime index in Utica from 2008 to 2015, with the violent crime rate dropping even a bit more sharply ( 24%).

The Oneida County fixed wireless data network dramatically increased the bandwidth available to employees at each of the connected sites. “Prior to our work with Integrated Systems, the MAN consisted of a series of lower speed terrestrial and unlicensed wireless systems,” said Dean Grant. “As we added high-bandwidth systems to the network, each group of employees experienced a significant increase in productivity and satisfaction with their ability to communicate. Over the last 4 years, we have recorded a 99.999% or better average uptime with our network, a definite improvement over what we were experiencing before.”

According to Grant, “Integrated Systems is an outstanding technology partner for any public or private entity looking to increase the capability of its network while reducing the long-term cost of that infrastructure. We estimate that the ROI for these projects turned positive within 3 to 5 years, and have been very pleased with the ongoing monitoring and service levels.”